Yohji Yamamoto at The Victoria and Albert Museum 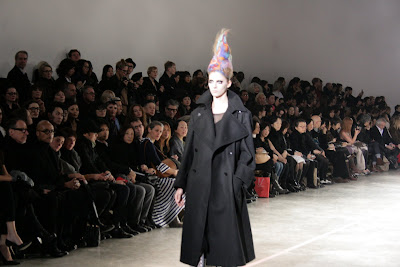 The Victoria and Albert Museum presents one of the most influential and enigmatic fashion designers of the last forty years, Yohji Yamamoto. Yamamoto is a visionary designer who has made a vital contribution to fashion, challenging traditional norms of clothing with his avant-garde style. This is his first major solo show in the UK and is an installation-based retrospective showcasing over 80 women's and menswear garments, which are most representative of his work.

This exhibition explores the work of idiosyncratic and ground-breaking designer Yohji Yamamoto. Fabric, he said, 'is everything'. This deep interest in textiles is at the heart of his approach to design.

Yamamoto became internationally renowned in the early eighties for challenging traditional notions of fashion by designing garments that seemed oversized, unfinished, played with ideas of gender or fabrics not normally used in fashionable attire such as felt or neoprene. Other works revealed Yamamoto's unusual pattern cutting, knowledge of fashion history and sense of humour. His work is characterised by a frequent and skilful use of black, a colour which he describes as 'modest and arrogant at the same time'.

This retrospective, experienced through a series of site-specific installations throughout the V&A and beyond, includes Yamamoto's menswear for the first time. The main exhibition space houses over 60 creations and a multi-media timeline which reveals Yamamoto's wider creative output.

As part of the retrospective, Yamamoto's work stretches further across London with satellite installations at the Wapping Project sites:

Yohji's women at Wapping Bankside
12 March - 14 May
A photographic exhibition of key photographers who have worked with Yohji Yamamoto.

YOHJI YAMAMOTO AT THE V&A

From 12 March - 10 July 2011, the V&A will present a retrospective of the work of visionary Japanese fashion designer Yohji Yamamoto. Conceived as a site-specific installation with its core in Gallery 38 and small interventions throughout the V&A, Yamamoto’s menswear collections will be included in the display of his work for the first time. Each space will take its own meaning within the narrative of the exhibition which explores Yohji Yamamoto’s design world.

Follow exhibition curator, Ligaya Salazar, as she documents the evolution of the exhibition and offers an insight into the research, design and installation process.

Posted by alfredosalazar at 2:26 AM No comments:

JOHN GALLIANO
Posted by alfredosalazar at 2:15 AM No comments: